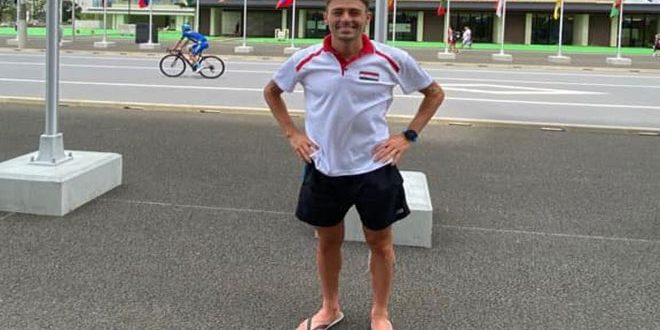 Syrian Triathlon athlete Mohammad Maso finished his competitions in Tokyo Olympics today by achieving 47th place out of 53 competitors with a time of 1 hour 54 minutes and 12 second.

Norway’s Kristian Blummenfelt came first after finishing the race in a time of one hour 45 minutes and four seconds, 11 seconds ahead of his closest competitor, Britain’s Alex Yee, who won the silver medal, while the bronze medal went to New Zealand’s Hayden Wilde.

In a statement to SANA, Maso indicated that this result is the best for him since he started playing the game, and it is the first time that he competes with the best players in the world. It is also his first participation in the Olympics and the second for Syria after Omar Tayyara participated in the 2008 Beijing Olympics.

In turn, Chairman of Triathlon Federation, Nasser al-Sayed noted that this race is one of the difficult races with the presence of the elite of the world champions in the game, pointing out that Maso was able to complete the race with his competitors despite the withdrawal of more than one player.

Maso participated in the Olympics at the invitation of the Triathlon Ranking and Tripartite Commission, after reaching 149th place in the world and 11th in Asia.

Official statistic: Corona virus deaths in England are 15% higher than...