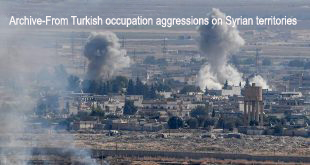 One civilian was martyred and three others were injured when Turkish occupation and its mercenaries from terrorist organizations attacked with heavy weapons the “M4” international highway, north of Raqqa city.

Local sources told SANA reporter that Turkish occupation and its terrorist mercenaries targeted with heavy and medium weapons during the past hours the international “M4” highway, causing the martyrdom of a civilian and the injury of three others who happened to pass by their car on the road between Ayn Issa town  and Hoshan village in Raqqa northern countryside.

Aleppo city holds funeral and commemoration ceremony for 46 martyrs from...