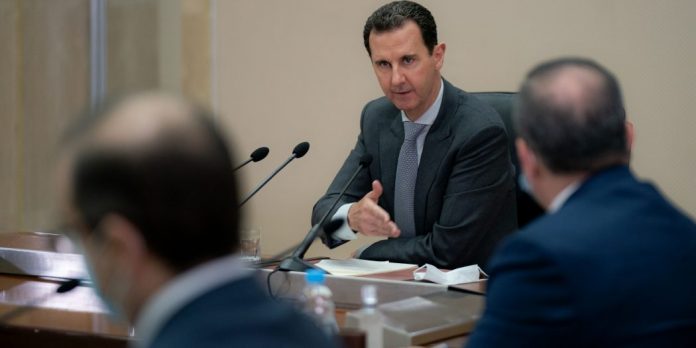 President Bashar al-Assad met on Wednesday members of the Higher Council of Local Administration which holds its meetings in Damascus on Wednesday.

President al-Assad stressed the importance of the council as the local administration, with all its bodies, is the direct link between the citizen and the state and it is the most capable authority to give facts on the ground and link them together in a way that enables the government to take right decisions according to priorities required by the needs of citizens.

President al-Assad said that decentralization which will be discussed by the meeting of the council is “important and necessary”, considering that the decentralization should start through practice and actual participation, before beginning by law, through the role played by governors and the provincial councils in moving society and inspiring it to participate in setting perceptions for the problems and crises.

President al-Assad noted that this role sets off from the continued communication with citizens transparently and directly, giving them information and clarifying facts to them in a way that makes them capable to take part in finding possible solutions that suit available potentials.

President al-Assad went on to say that decentralization should start through differentiation between the role of the governor and the role of the Municipality Chief and the clear specification of the capacities and tasks.

The President also pointed out to the importance of studying laws that govern the work of local administration bodies and putting strict regulations in order to curb corruption and combat infringements, including those which largely affect the urban construction system.

President al-Assad added that partnership among local administration, municipalities and popular activities should not be limited to searching about solutions for current problems only, but for putting perceptions and studies for investment projects, particularly in rural areas in a way that suit the potentials and resources of those areas and achieve additional value to citizens.

The President stressed that medium and micro- enterprises play key role in establishing a genuine economy, particularly in light of the blockage and war conditions such as Syria encounters.

Syria, Iran discuss development of cooperation in the field of technology

Corona kills 2528 people in one day in the United States