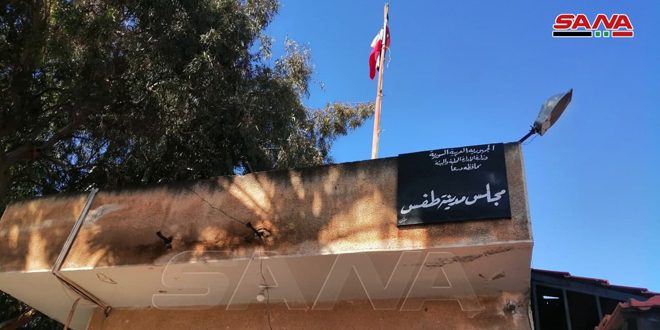 Syrian Arab Army Units on Thursday entered Tafas town in Daraa northwestern countryside to establish security and stability in it.

A field commander told SANA reporter that deployment of the army units aims to establish stability and end the state of insecurity in Tafas city, adding that the role of the army units will be boosted through cooperation of the locals.

For his part, police commander in Daraa province, Dirar al-Dandal, affirmed that “the police units will return to the city to perform their role in maintaining security.”

Earlier, SANA reporter said that the Syrian Arab army units have begun to deploy to Tafas town and to set guard posts inside it to establish security and stability in the town paving the way for the return of the state institutions’ work.

The reporter added that over the past days, army units have carried out operations for combing the areas in the vicinity of the town and dismantling explosive devices paving the way for the return of the locals to their houses and agricultural fields.

Over the last period, Tafas town has witnessed a state of insecurity and the locals have been suffering from the practices of intimidation and the attacks carried out by number of wanted men and outlaws.

Iran reaffirms necessity to end crisis in Syria based on respecting...