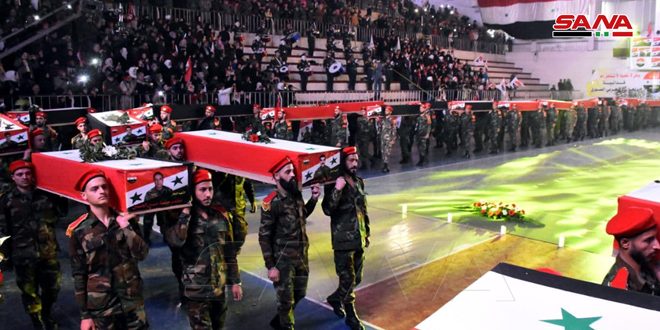 Liwa al-Quds held on Saturday a funeral and commemoration for 46 martyrs who passed away in 2016 while they were defending Aleppo city.

The martyrs were targeted in a terrorist explosion in the tunnel of Jameiyat al-Zahraa in the west of the city.

The funeral comes after completing searching operations in the place of the explosion following the liberation of the city from terrorism.

During the ceremony held at al-Assad Sports Hall in Aleppo, Head of the Security and Military Committee in Aleppo, General Saleem Harba, said that the martyrs represented the most wonderful epics of heroism in steadfastness and defending Aleppo and the homeland’s soil.

In Turn, commander of Liwa al-Quds, Mohammed Saeed, said that the funeral and commemoration of the martyrs is part of offering gratitude and favor for those heroes who sacrificed their lives for their homeland.

Democratic Korea… A continuous rise in all domains