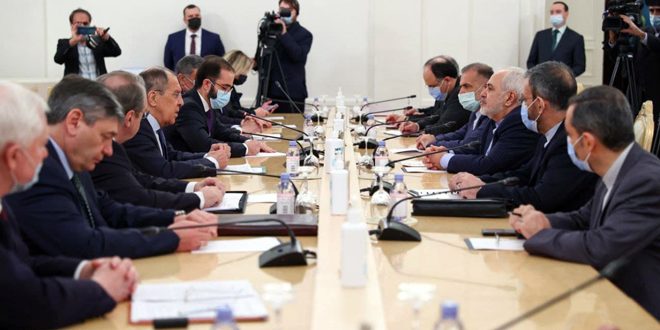 Russian Foreign Minister Sergey Lavrov and his Iranian counterpart, Mohammad Javad Zarif reiterated the need for finding a political solution to the crisis in Syria.

Lavrov stressed during a press conference with his Iranian counterpart in Moscow on Tuesday The necessity to find a political solution to the crisis in Syria and implement UN Resolution 2254 through a Syrian-Syrian dialogue without any external interference, noting that the talks dealt with preparations of the next meeting in Astana formula scheduled to be held next February in Sochi.

Resolution 2254, adopted unanimously by the United Nations Security Council in December 2015, affirms that the Syrians are the ones who determine the future of their country by themselves without any external interference, and that terrorist organizations are outside any political process.

Under the patronage of President al-Assad, a new batch of Military Academy Students graduated

Iran’s Top Security Official: Delay in Expulsion of US Troops from Iraq Escalates Crisis in Region