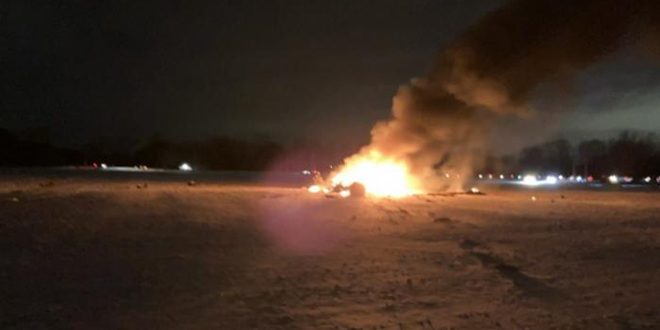 Three National Guard members were killed in a helicopter crash in New York state Wednesday night, according to the state’s Division of Military and Naval Affairs.

The crash was reported shortly after 6:30 p.m..

“This is a heavy, heavy burden upon all of us,” Monroe County Sheriff Todd Baxter said at a press conference. “These are our freedom providers… just showing again that freedom is not free. We lost three great Americans today in the service of our

According to preliminary 911 reports, “there were calls of sputtering sounds of an engine, and that the aircraft was flying very low, more low than normal,” Baxter said.country.”

Shortly after the calls, there were reports of a crash.

Baxter said authorities have been in contact with the control tower at the Greater Rochester International Airport, but have not reviewed whether those on board the helicopter were communicating with anyone in the tower at the time of the crash.

He said he did not know helicopter’s flight plan, but authorities are working to “identify the path of the aircraft and what the debris field looks like.”

The New York National Guard is headed to Mendon and will conduct a joint investigation with the Federal Aviation Administration, Baxter said. Deputies will complete a preliminary investigation of the crash and expect to remain at the scene overnight and on Thursday.

The aircraft was assigned to C Company of the 1st Battalion, 171st General Support Aviation Battalion, according to New York State Division of Military and Naval Affairs.

“I am devastated by the news tonight of a New York Army National Guard helicopter crash in the Town of Mendon that killed three of New York’s bravest during a training mission,” Gov. Andrew Cuomo said late Wednesday.

Cuomo added: “National Guard members are our citizen soldiers who voluntarily serve and protect both here and abroad, and I extend prayers and condolences from all New Yorkers to the family, loved ones and fellow soldiers of these honorable heroes who we will never forget.”

Cuomo said he is directing flags on all state buildings be lowered to half-staff Thursday.

A New York State Police helicopter assisted in the search for potential survivors , hovering over the crash site. The debris field extends “a few city blocks,” roughly hundreds of feet in each direction from the crash site, Baxter said.

Mendon Fire Chief Bill Kessler said the helicopter was on fire when first responders arrived at the scene. The airport’s fire department was also called to the scene to extinguish the fire, he said.

While there are houses near the crash site, Baxter said no buildings were struck.

Mendon is a town of about 10,000 people in upstate New York, according to U.S. Census data. It’s just under 80 miles west of Syracuse.

Under the patronage of President al-Assad, a new batch of Military Academy Students graduated

Iran’s Top Security Official: Delay in Expulsion of US Troops from Iraq Escalates Crisis in Region

Military source: The Syrian army secures the entire perimeter of the...

President al-Assad in a cable to President Putin: We aspire that...